Jake Wightman gave his all in a Commonwealth 1500m final for the ages. This time, though, the familiar formula did not quite work as Ollie Hoare swooped at the last to win Australia’s first middle-distance gold at these Games since Herb Elliott in 1958.

Hoare promised to buy the legendary Elliott, who is now 84, a drink. It will surely be quite some celebration.

However, Wightman had no regrets after his bold attempt to win three major titles in a summer – at the worlds, Commonwealths and Europeans – fell short. Two weeks ago in Eugene the 28-year-old Scot had stunned everybody by kicking for glory with 200m remaining and then holding on for a famous world title.

This time, though, when he repeated the trick his pursuers were ready – and his legs were a little more heavy. And while he still led with 50m to go, he was passed first by the Kenyan Timothy Cheruiyot and then by Hoare, who got up right before the line to win in a Commonwealth Games record of 3:30.12. Cheruiyot took silver in 3:30.21 with Wightman 0.32 back in third.

“That was as good as I could have done,” said Wightman. “I didn’t want to be a pedestrian and be running for minor medals. I wanted to make a statement but I didn’t feel anywhere near as good as I did a couple of weeks ago.

“I knew when I went I was going to have a tough home straight but hoped everyone else would be feeling the same,” he added. “Initially I was pretty disappointed but, if I told myself I would come back two weeks after winning the world champs and in a similar field pick up a bronze, I’d be pretty happy. It’s mentally so tough to come back from that.”

The bookies might have made Wightman the odds-on favourite. But he, like the rest of us, knew this was a 1500m final suffused with class and doubts. Three of the first four in last year’s Olympics were in the field, along with Hoare who had had several notable performances this season before bombing out in the semi-finals of the worlds. This was to prove the sweetest of redemptions.

There was no hanging around as Kenya’s Abel Kipsang pulled the field round the first lap in a rapid 54 seconds, with Cheruiyot in close order. But Wightman looked well-placed before he made his move on the back straight. “It was a bit instinctive,” he said. “I wanted to get to the bend in the lead again. I knew I wasn’t as fresh. I was hanging on in the home straight, as opposed to feeling strong. I felt pretty vulnerable.”

Hoare, meanwhile, was revelling in a stunning victory. When asked for his thoughts, he replied simply: “Holy shit.” 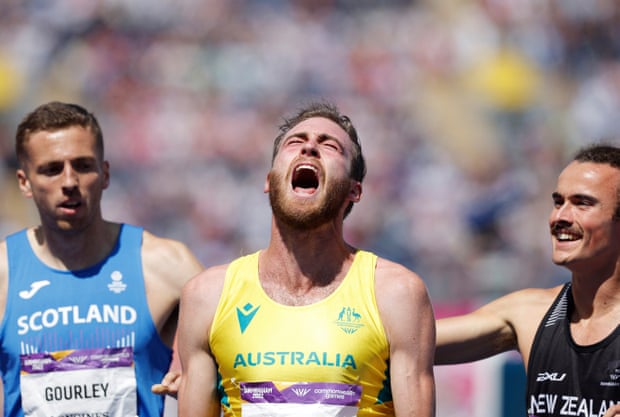 “The race went out quick straightaway,” he said once he had recovered his composure. “But I’ve been training for a fast race and I ran 3:47 in Oslo for a mile so I knew I had the strength there. It was just about making the kick at the right time.”

“I went through on the inside with a lap to go and I saw Jake next to me and I started to panic because he’s the world champion. And you can hear the Scottish roar in the stadium. But I tried to hold my composure. And then, with 100 metres to go, when I got out to lane three, it was all about holding form and just running like bloody hell.”

Sign up to The Recap, our weekly email of editors’ picks.

But it was only in the last five metres that he finally got up as Cheruiyot stumbled.

“I could tell I had him because he couldn’t gauge where anybody else was,” said Hoare. “So he was in a very volatile position, even if you’re of his calibre. And I saw that he was starting to lock up and I knew I had more juice in the tank. I thought: not today. I’m going for it today. And I was able to come through at the end.”

Elsewhere on the final morning of the athletics there was hammer gold for England in the form of Nick Miller, whose modest throw of 76.43m was good enough against a weak field.

We serve the following areas

More Cities
GET A FREE QUOTE

Or call us at